What is the Service Pupil Premium?

The Department for Education introduced the Service Pupil Premium (SPP) in April 2011 in recognition of the specific challenges children from service families face and as part of the commitment to delivering the armed forces covenant.

State schools, academies and free schools in England, which have children of service families in school years Reception to Year 11, can receive the SPP funding. It is designed to assist the school in providing the additional support that these children may need and is currently worth £300 per service child who meets the eligibility criteria.

Pupils attract the SPP if they meet the following criteria:

The purpose of the Service Pupil Premium

Eligible schools receive the SPP so that they can offer mainly pastoral support during challenging times and to help mitigate the negative impact on service children of family mobility or parental deployment.

Mobility is when a service family is posted from one location to another, including overseas and within the UK.

Deployment is when a service person is serving away from home for a period of time. This could be a 6 to 9 month tour of duty, a training course or an exercise which could last for a few weeks.

The SPP is there for schools to provide mainly pastoral support for service children, whereas the Pupil Premium was introduced to raise attainment and accelerate progress within disadvantaged groups.

At Navenby we do not combine SPP with the main Pupil Premium funding and the spending of each premium is accounted for separately.

What could the Service Pupil Premium be used for?

In order to support the pastoral needs of service children, schools have flexibility over how they use the SPP, as they are best placed to understand and respond to the specific needs of those pupils for whom the funding has been allocated. The funding could be spent on providing a variety of means of support including counselling provision, nurture groups, e-bluey clubs etc.

Schools might also consider how to improve the level of and means of communication between the child and their deployed parents.  In addition, staff hours may be required to support the needs of service children when they join a new school as a result of a posting or when a parent is deployed and these hours could be funded by the Service Pupil Premium.

SPP should not be used to subsidise routine school activity (trips, music lessons etc.), however, schools may choose to fund school trips just for service children, to help them enjoy their time at school and build a sense of a wider community and understanding of the role their service parent plays (e.g. with military specific trips) to help them cope with the potential strains of service life.

Please speak to us in school if you have any concerns regarding the SPP and how it can support your child in their education.

Our Forces children meet regularly in the School library to discuss and explore areas which are significant to them as members of a military family.  Whilst the topics covered may not necessarily be on the curriculum the work that they do does include curriculum subjects including numeracy, literacy, art, RE, music and science.  Subjects discussed are planned and delivered in consultation with the children in order that the workshops are topical and relevant to their needs.

We also enter a number of competitions which are run by military charities throughout the year which the children particularly enjoy.  These competitions provide the children with an opportunity to show their artistic and literary flair.  Examples of these wonderful pieces of work are on display in the library, either on the walls/display board or in the folders on the top shelf of the bookcase (to the right of the upcoming events display).

Due to the impact of COVID-19, our Forces Club has been unable to meet as regularly as we would have wished. However, I have always made sure that I have been available to our forces children if they have needed me throughout this challenging time.

Please do not hesitate to come and find me in school if you have any questions about Forces Club.

During the pandemic it was not possible to run Forces Club across the school.

Since October half term, Forces workshops have re-commenced weekly with 21 children Key Stage Two attending (from 18 families).  Each year Group has had a session of between 30-40 minutes.  Due to not being able to mix bubbles, it has not been possible to re-commence group work with KS1 children yet.  We are hoping to do this soon.

During the recent OFSTED inspection, I spent some time with one of the inspectors discussing Forces Club and the targeted support which we offer to this group of children.  The inspector was very complimentary about what we are doing and had not come across anything like this in any other school which he had inspected. He saw it as a real strength in our school – as mentioned in the official report.

Without exception, all the children have expressed real delight in being able to return to Forces Club, and we have spent this term working on craft based activities as the children were keen to update their displays (in the library and corridor).  Year six produced some really wonderful diary writing which linked to their WW2 topic, Year 3 created some lovely acrostic poetry and year 4/5 made 3D poppy mobiles and wordles using vocabulary linked to the qualities they believe you would need to be in the military.  It has been really wonderful to work with them again and see their enthusiasm.

Our new display in the library.

On Monday 11th November 2019 we celebrated Red, White and Blue day and commemorated Remembrance with a special assembly created and presented by the Forces Club children from our military families. We were thrilled that so many parents attended our Remembrance Assembly and the children were resplendent in Red, White and Blue themed clothing in exchange for a small donation which was shared between three major military charities: ABF, the Soldiers charity; Royal Air Force Benevolent Fund and The Royal Navy and Royal Marines Charity. 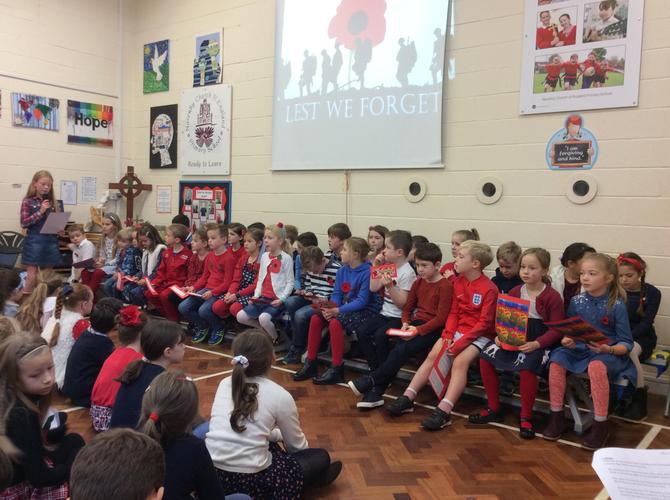 In preparation for Remembrance, Mrs Harrison, Mrs Woolsey and some members of Forces Club came into school over half term to create a display in the Entrance Hall.  We had a wonderfully messy, creative time and we hope that you have all had an opportunity to admire the wonderful final creation. 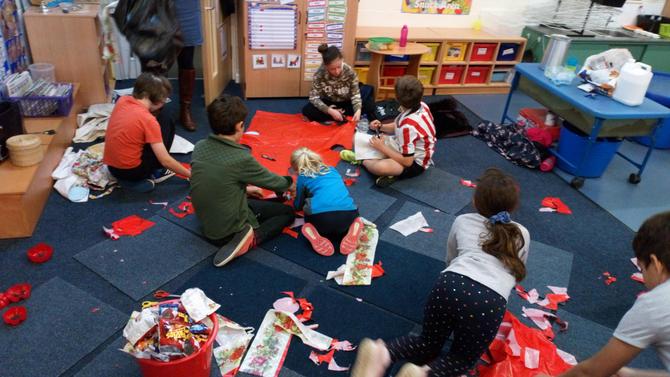 On Friday 21st June we celebrated Camo Day.  This is a national event held in primary schools to raise awareness and funds for the military charity SSAFA (The Soldier's, Sailor's and Airmen's Families Association).

The day started with a collective worship in which Mr Hellard spoke eloquently about D-Day and the lessons that can be taken forward from the bravery and commitment shown by our military personnel.

Children came to school dressed in camo, military style and red, white and blue clothing. Voluntary donations raised £134.50 - much needed funds for SSAFA to continue the wonderful work that they do supporting our military personnel and their families.

The Combined Cadet Force from LSST to the school did a wonderful job lead by Ella Wyatt.  They planned a series of military themed activities for all of our children with some new activities too.  Thankfully, the weather was perfect and we had a really enjoyable day. 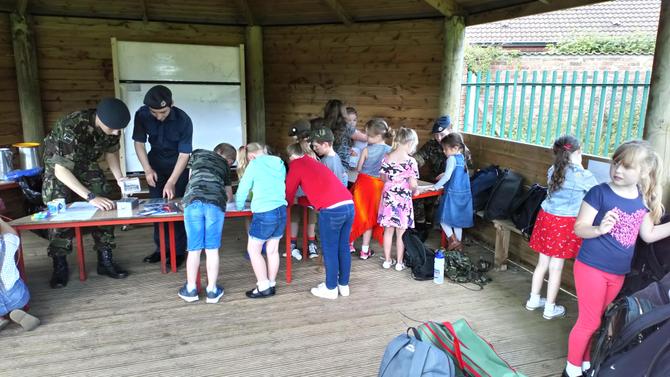 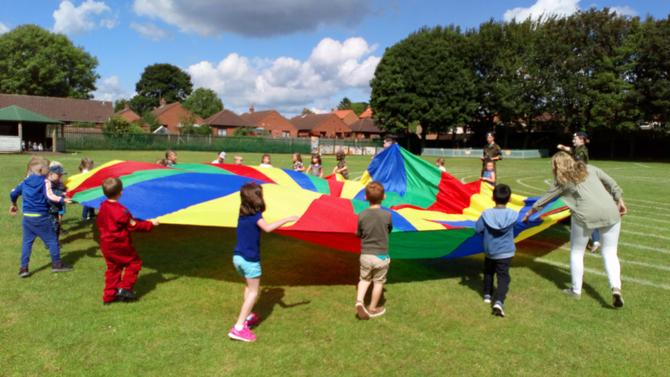 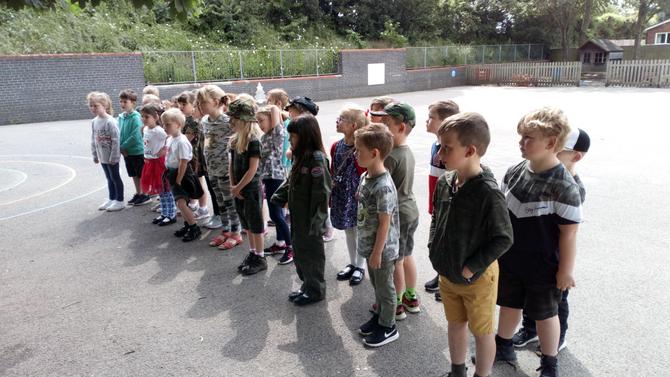 On Monday, I took four year 5/6 children (Ewan, Shannon, Lily and Chloe) to the flag raising ceremony at the District Council Office in Sleaford.  This annual event marks the start of a week of events to celebrate the work of our armed forces in the UK and abroad.  It was a lovely occasion and the rain held off.

As part of this event our Forces Club children were invited to enter a competition to create a picture which celebrates our three services on the 75th Anniversary of D-Day.  Again, this year Navenby were fantastically successful.  Congratulations to Erin (1), Fin (4) and Shannon (6) who won in their age groups, Thomas (1), Joseph (2), Eve (3), Charlie (4) and Chloe (5) who were runners up and a huge congratulations to Emma (2) who not only won in her age group but was the overall winner of the whole competition!  All were congratulated in assembly on Camo Day last Friday and the winners will receive prizes in due course.

On Monday 20th May, we were given the rare opportunity to visit RAFC Cranwell. Whilst there, we were put through our paces by a drill instructor, learnt about our local aviation heritage and were given an informative tour of the spectacular College Hall. What a day! Here are some photos of our wonderful experience… 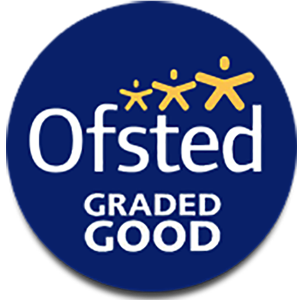 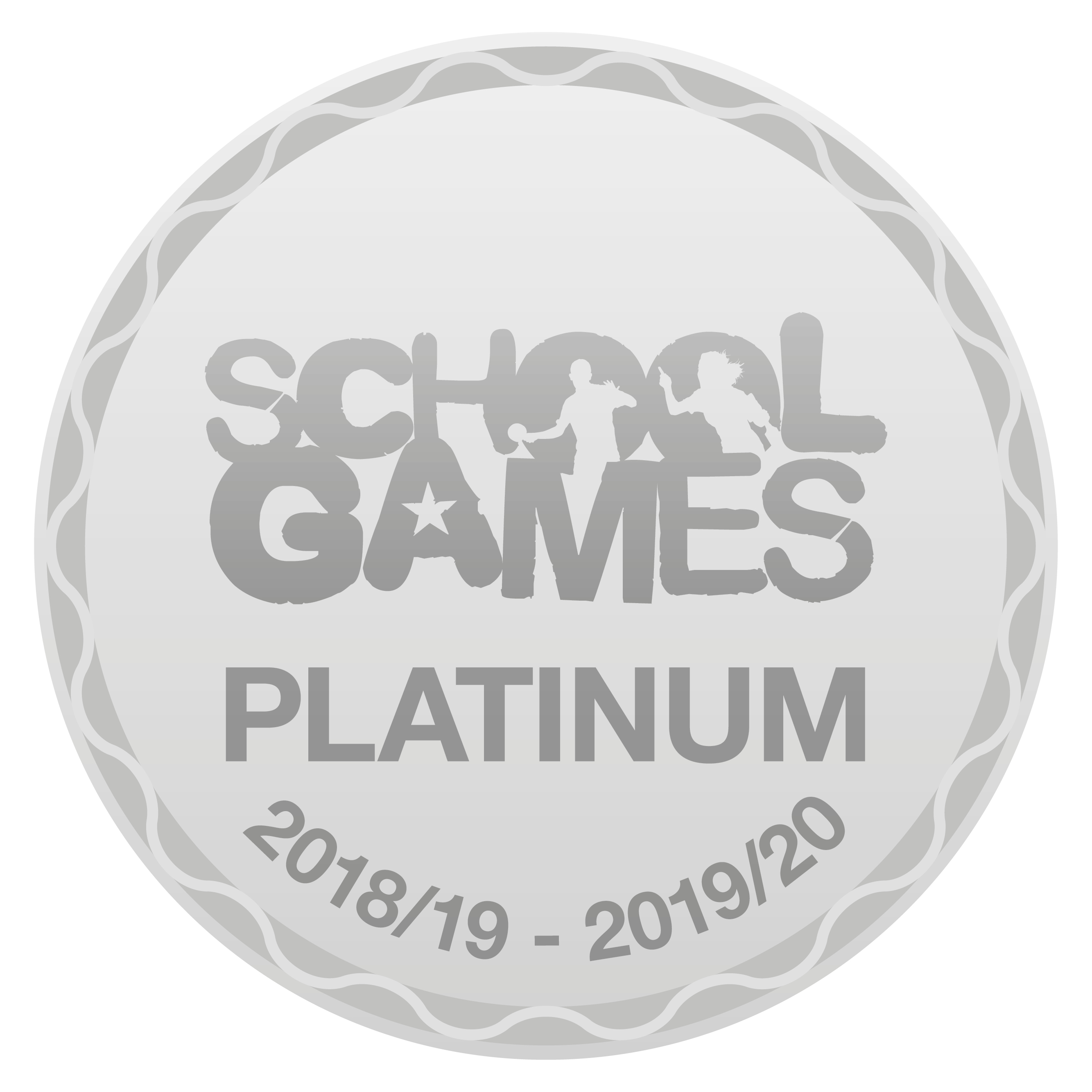